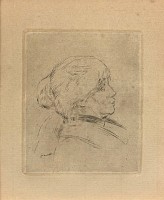 Renoir was born on February 25, 1841, in the small manufacturing town of Limoges. His family moved to Paris when he was four years old.  Gounod advised him to become a musician, but Renoir felt more compulsion toward the graphic arts.  At thirteen he joined a ceramic establishment where he painted flowers on porcelain. Later he supported himself by decorating fans.  In 1861 he joined the Gleyre atelier where Sisley, Monet and Bazille were also studying.  None of them was very happy there, but Renoir especially was out of sympathy with the academic atmosphere of the place.  When the master accused him of seeking amusement from painting, he replied that of course he did, or he would otherwise abandon the pursuit.  After a year he began to work without a teacher, adapting Courbet's trick of using a palette knife, and painting with purer and lighter colors.

He first exhibited in 1868; he also participated in the famous Nadar exhibition of Impressionists in 1874.  He was dependent on portraiture for his living until the auctions of his works in 1875 and 1877 which brought him some independence and enabled him to travel.  In 1883 a sort of break occurred in his work.  He felt he had gone to the end of Impressionism; he was reaching the conclusion that he did not know how to paint or draw.  This bewilderment and discouragement, though exaggerated, had a salutary effect, for Renoir reviewed his methods, again studied the works of old masters whom he loved and went on painting pictures, better than before.

By the 1890s Renoir was well settled into family life.  Owing to his delicate bronchial tubes, he and his wife with their young son Pierre spent the winters by the Mediterranean and often in summer visited seaside spots on the Channel.  In 1893, a second son, Jean, was born.  Jean Renoir was to become the now famous movie director.

Suffering from failing eyesight in his later years, Renoir began to use stronger colors. His last years were spent in Provence where he continued to paint although he could only get about in a wheelchair and his hand was so crippled with arthritis that his brush had to be strapped to his wrist.  He could no longer get far from the house, but finding he could paint every day he was contented. He died in Cagnes.