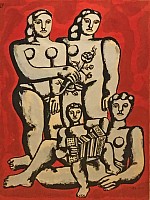 One of the major Cubist painters in France in the early 20th Century, Fernand Léger, also became a sculptor, ceramist, art educator and filmmaker.  He was born in Normandy where his father raised livestock, and originally studied to be a re-toucher of photographs and an architect's draughtsman.  Between 1897 and 1899, he was apprenticed to an architect in Caen, and then worked in Paris for two years as a draughtsman followed by two years as a retoucher.

However, he did begin to work seriously as a painter, first working in a style influenced by Impressionism.  Later he destroyed most of the work of this period.  In 1907, upon seeing the painting of Cézanne at the Salon d'Automne, he adopted a more geometrical style.  By 1910, affiliated with the Puteaux Group, an offshoot of the Cubist movement, and living among bohemian artists in Montparnasse in Paris, he had adopted his own form of Cubis*, which critics dubbed 'Tubism' because of the emphasis on cylindrical forms.  Soon he was considered one of the country's three major Cubist painters along with Pablo Picasso and Georges Braque but differed from then in that he did not do collage, and he placed curvilinear forms against rectilinear grids.  In his stiriving for a sense of action in his paintings with the curvilinear lines, Léger was also much influenced by the Futurism of Italy.

During World War I, Leger was gassed in Verdun in 1916 during service in the army, which he joined in 1914 and was at the front in Argonne.  He did many sketches of wartime subjects, especially airplanes and guns and fellow soldiers, and during convalescence in Villepinte, he painted The Card Players (1917).  This painting has been described as "a canvas whose robot-like monstrous figures reflect the ambivalence of his experience of war." This work, reflecting his shock at the realities of war, was the beginning of his 'mechanical' period, the turning of his back on abstraction.

He devoted himself to depicting common, real objects that he described as "everyday poetic images" and that gave him a sense of returning to order.  Cityscapes and machine parts became subjects in his work as did nude females, mothers and children, and animals grazing in landscapes.  These paintings had very bold colors.  Not everyone appreciated his work.  Alfred Barr, Director of the Museum of Modern Art, said that Léger was a "noisy artist chasing fire engines, the business about him being a champion of the machine, and the clever mot about 'Tubism."

In 1919, Leger married Jeanne-Augustine Lohy, and the following year began a friendship with Le Corbusier, a French Swiss architect who espoused modernism and became affiliated with the International Style.

In 1925, influenced by Le Corbusier, he did some mural decorating of highly abstract designs with Robert Delaunay for the entry hall of the exhibition Les Arts Décoratifs.  He became affiliated with the Purist Movement and the aesthetics of machines espoused by the Purists and created paintings with that "were static, precise and polished appearance of machinery." He also did paintings with gigantic objects isolated in space, created decor for theatres, and experimenting with cinema, produced the "Ballet Mechanic", the first film that did not have a script and one much influenced by Futurism.  It was a "series of images of a woman's lips and teeth, close-up shots of ordinary objects, and repeated images of human activities and machines in rhythmic movement." one point he considered giving up painting for filmmaking

Fernand Leger lived in the United States during World War II, teaching at Yale University and Mills College.  He was much startled by the sight of trash or refuse in landscape, the juxtaposition of junk with flowers, and he did paintings reflecting these sights such as The Tree in the Ladder (1944) and Romantic Landscape (1946).

He returned to Paris after the war and opened an art academy with Robert Brice, a former student.  He became a member of the communist party and again returned to a more realist style focused on activities of common people.  Reflecting his interest in working classes and his desire to make artwork understandable to them, he did large paintings "celebrating the people, featuring acrobats, cyclists and builders, thickly contoured and painted in clear, flat colours.