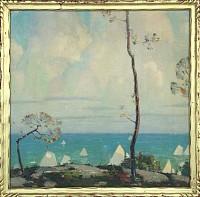 The most notable aspect of Lawless’ approach to landscape painting is his ability to incorporate the authentic, serene geometry of nature. His bold and vigorous style is also characterized by highly structured forms, rich hues, and emphasis on the effects of natural light.