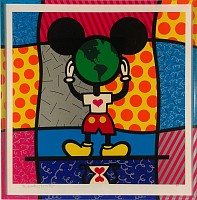 Brazilian-born and Miami-made, Romero Britto is an internationally renowned pop artist who uses vibrant color, playful themes and hard-edged compositions to capture the attention of both youthful spirits and educated art collectors.

Born in Recife, Brazil and self-taught at an early age, he painted on newspapers, cardboard or any scraps that he could find. In 1983, Britto traveled to Paris where he was introduced to the works of Matisse and Picasso. After exhibiting in galleries and private shows, Britto was encouraged to travel to the United States where Pop Art was flourishing.

In 1988, he was selected alongside Andy Warhol and Keith Haring for Absolut Vodka's "Absolut Art" campaign. He combined his influences including cubism and Pop to create an iconic style that, as The New York Times described, “exudes warmth, optimism and love.” It is this artistic voice which has established Romero Britto's reputation and granted him widespread international recognition.

His work has been exhibited in galleries and museums in over 100 countries, including the Salon de la Societé Nationale des Beaux Arts exhibition at the Carrousel du Louvre in 2008 and 2010.  In December 2013, Romero Britto was the first living artist to be invited to exhibit at Museo Soumaya in Mexico City.

He has created public art installations for the O2 Dome in Berlin, John F. Kennedy Airport in New York, Cirque Du Soleil at Super Bowl 16, and has been credited with the largest monumental sculpture in the history of London’s Hyde Park. He served as an official artist for the 2010 World Cup and was recently appointed Ambassador to the 2014 FIFA World Cup in Brazil.
Over the years, Britto’s pop sensibility has lent itself to many collaborations with international brands such as Audi, Bentley, Coca-Cola, Disney, Evian, Hublot, Mattel, and Technomarine.

Romero Britto is an artistic advocate and activist for charitable organizations worldwide and in Florida and has served on several boards such as Best Buddies International and St. Jude’s Children’s Research Hosptital. Most importantly, he is an artist who believes "art is too important not to share." Britto has donated time, art and resources to more than 250 charitable organizations. A firm believer in the role of an artist as an agent of positive change, Romero Britto is committed to developing and supporting the powerful role art plays in world issues.