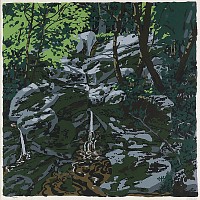 "Robert M. Doty, former director of the Currier Gallery in New Hampshire, for instance, has called Welliver 'one of the best landscape painters in America.' Former United States Poet Laureate Mark Strand has dubbed Welliver 'the finest landscape painter America has produced.' Art historian Frank H. Goodyear, Jr. has seconded that nomination, writing that 'America has not seen a native landscape painter of the genius of Neil Welliver since Frederic Church (1826-1900).' And Time magazine art critic Robert Hughes has concluded that 'Welliver's huge paintings of the Maine woods are among the strongest images in modern American art.'

The historical importance of Neil Welliver's landscapes, then, is that they represent the highest achievement of landscape painting in the wake of abstraction. Whereas Maine's other great representational painter Andrew Wyeth paints as if the 20th century never happened, Neil Welliver's "realistic" images of Maine have absorbed the most important lesson of abstraction, namely that a painting should have integrity of its own as a thing-in-itself before it serves as an imitation of something other than itself.

Neil Welliver is nothing if not his own man. At 65, he is a tough, no-nonsense individualist who carries himself with something of a martial air, a persona accentuated by his close-cropped white hair, clipped mustache, and penchant for wearing khaki field shirts. Indeed, it would be easy to imagine him as a retired military officer, or, coming upon him in the fields and forests of Maine, to mistake him for a farmer or logging contractor. He is an artist and an intellectual who wears his learning very casually.

Welliver grew up in Millville, Pennsylvania, in a rural landscape long since destroyed by development. He is a graduate of the Philadelphia Museum College of Art (1953) and of Yale (1955). At Yale, he studied abstract painting and color theory under Josef Albers, the Bauhaus master famous for his Homage to the Square series. Welliver's firm grasp of color relations and the fact that most of his paintings are square (as opposed to the horizontal rectangle traditionally associated with great landscape painting) can be traced to Albers' influence.

Welliver himself taught painting at Yale (1955-65) and at the University of Pennsylvania Graduate School of Fine Art (1966-1989). From 1970 until his retirement in 1989, he commuted monthly to Philadelphia from his farm in Lincolnville, Maine, where he became part of a mid-coast Maine circle of outstanding realist painters that included Fairfield Porter, Alex Katz, Lois Dodd, Yvonne Jacquette and Rackstraw Downes.

In 1971, Welliver's best friend drowned in a pond near his farm. In 1975, his farmhouse burned to the ground, and his entire collection of his own work went up in flames. In 1976, his infant daughter Ashley died of Sudden Infant Death Syndrome and, six months later, his wife Polly died suddenly of a viral infection, leaving Welliver alone to care for four sons. Then, in 1991, Welliver suffered the most severe blow of all when his son Eli, 20, was murdered while studying in Thailand. One might reasonably expect to see the impact of such tragic losses in an artist's work, but the serene beauty of Welliver's landscapes appears eerily undisturbed by his personal tragedies.

It may just be, however, that Welliver's life manifests itself in his art in ways too subtle to be detected by viewers unfamiliar with his story. The elimination of the human figure, which marked the transition to his mature work, for instance, occurred shortly after the death of his daughter and his wife. And in the painting he has done since the murder of his son, Welliver has repeatedly been drawn to subject matter that most landscape painters would have avoided - the aftermath of a forest fire. "My son had just died," Welliver explains. "I went immediately to the Allagash. There had been a huge forest fire. Most painters do not go out in the middle of something like that and paint. I did. But I did not think about that when I was painting."

Welliver owns a cabin in the Allagash wilderness along Maine's northernmost border with Canada. Many of his recent paintings - Twin Brooks -- Allagash (1991 ) and Low Water -- St. John's (1994), for example - celebrate the ebb and flow of natural cycles in this northern forest land. But the greatest departure in his recent paintings has been a preoccupation with the ravages and rebirth in the wake of the forest fire. Fire's Edge and Singed Fir (1992) is one of the most desolate of these paintings, presenting as it does the charred remains of burned trees enlivened only by the new growth of ferns among the singed fir.

Friends like to think that in painting nature's capacity to recover from disaster Welliver is externalizing his own healing process, but that is not a symbolic leap the artist himself consciously makes. Welliver resists injecting himself into the landscape, the result being that some viewers find his work cool, detached and impersonal. And that's just fine with Welliver.

"I'm like ice when I paint," he says. "My body temperature goes down to 60 degrees. It's very un-emotional, but God knows there is enough action and emotion in the woods to cover all of the emotions. To have any emotional impact, for me, would at best be a distraction."

Underlying this Welliver reserve is a methodical approach to painting that is at once mechanical, meditative and modern. Unlike most painterly realists who lay down an undercoat, rough out the image, and then work toward greater and greater refinement, often painting over and into finished areas, Welliver imposes a rigorous discipline on his canvases. There are no accidents in a Welliver landscape, and there is nothing beneath the surface except a blue print, a diagram, if you will, of the final image.

Welliver begins each painting traditionally, executing an oil study (several of which are included in the 1 exhibition) directly from nature. Often he paints from canoe, snowshoes or cross country skis, preferring wintry landscapes. Three frost-bitten fingers tell him when it is time to pack up the easel and head for the studio.

In the barn studio attached to his home, Welliver recapitulates the direct experience of nature using the study and memory as his guides. "I have an absolutely elephantine memory for what I see. I even remember pine needles and how they lie," he says. "When I'm painting the big pictures in the studio, my mind is running wild. To a certain extent you re-live the experience of nature on a greater scale and, one hopes, better."

To create his large - typically, six, seven or eight foot square - paintings, Welliver first draws a cartoon outline of the image on a huge sheet of sign writer's paper. He then traces the lines of the cartoon with a serrated wheel that perforates the paper drawing. Taping the perforated drawing over a primed canvas, he taps the drawn lines with a bag of charcoal dust to transfer the image onto the canvas.

The most remarkable thing about Welliver's method, however, is that, once the guidelines have been transferred, he begins in the upper left hand corner and executes a finished painting left to right, top to bottom. When a Welliver landscape is half finished, it is literally half painted. The top half is a finished oil painting, the bottom half is white canvas with faint outlines waiting to be followed, albeit loosely.

"In the studio, I make things up as I go along," he explains. "It's very abstract in that sense." Once an area is painted, however, Welliver never goes back to adjust or re-paint it. When he gets to the bottom of the canvas, he simply signs his name in the lower right corner and stops. It is a balancing act as demanding of his attention as a high-wire act and just as exhausting.

The landscape paintings that result from this painstaking process are not, then, imitations of nature but highly mediated records of a human encounter with a particular place. While he does not paint himself into the pictures - either figuratively or expressionistically, the paintings are as much about Welliver's mindfulness as about the scene they depict.

"I would call them presentations of nature rather than re-presentations," Welliver says. "I am presenting something. I consider myself part of nature. I am not Homo Sapiens, lying back, looking at nature. I feel totally at home in the woods, and I have a gut understanding that I'm part of it."

So, in the end, what you have in a Neil Welliver landscape is the evidence one artist has collected of the visual order within the seeming chaos of nature, of human consciousness alive in an indifferent universe, and of the clarity of vision that can be brought to bear on a beauty borne out of pain."